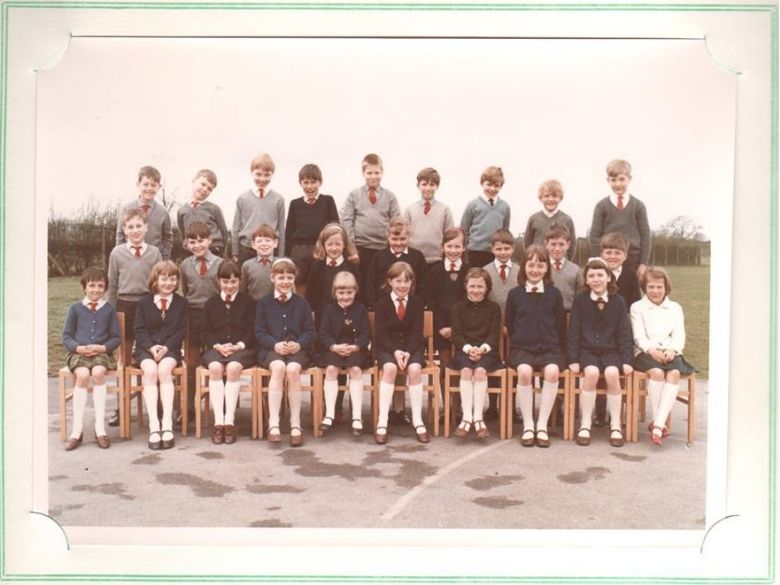 I am writing to share some of my memories with you. This is one of my class photos from the 1960’s. I am in the front row, 4th from the right.

I started school at Cardinal Newman when it opened in 1966, having spent one term at St Charles’ school in Weybridge. Although I was born and lived in Hersham, we had to travel by coach without our parents when we were only 5 years old to attend the nearest Catholic school in Weybridge. We were delighted when we started school at Cardinal Newman; it was all crisp and new and had an indoor toilet! Now I was able to walk to school alone even though I was only five years old or at least with my big sister and friends.

We had to walk from Queensway along the Hersham Road, through the back of Bell Farm School field and onto our school field.

One day, on the way to school, we found the ‘War on Want’ collection box in the field. We took it to school only to find that the school had been burgled during the night. We felt like detective heroes!

Mr O’Malley was the Head master and his son Anthony was in my class along with lots of other fun friends. Miss O’Brien was the Deputy Head and she and Mrs McDonald used to play tricks on each other and hide in the classroom cupboard. They made us laugh such a lot. Miss O’Kelly was one of my favourite teachers and she used to give me crosswords to do as I liked them so much and I still love crosswords! Sadly, I didn’t like maths as much and still don’t, but I was good at & enjoyed English, History, French and playtime.

I remember the day the floods came and having to paddle home in my socks escorted by the caretaker as I missed the bus because I was looking for my little brother who had already got on the bus!

At Christmas, we always performed a school play and carol service and on the last day of term before Christmas, Mr O’Malley always showed us Tom & Jerry cartoons from a projector on the screen in the school hall. I remember performing ‘Oliver’ one Christmas and I still have the programme!

We had four ‘school houses’, Matthew, Mark Luke & John and all our points for good work & behaviour were added to our ‘house’ over the year and after the summer sports day, the winning house would be announced. I was in John ‘house’ and we won a lot because Michael Collins was in our house and very good at sports!

I am still friends with a group of girls I started school with even though we have all moved to different areas; we still meet up once or twice a year and laugh about our school days.

I now teach nurses at university and maybe some day you might decide to become a nurse and bring very special values and qualities from your education to caring for the sick.