Six of the best at District Cross Country!

On Saturday we hosted 10 visiting schools from Elmbridge & Runnymede for the annual District Cross Country Championships. On a very pleasant spring morning with mild temperatures, a gentle breeze and excellent conditions underfoot, the scene was set for some exciting races. Cheered on by a huge supportive crowd of parents, grandparents, brothers, sisters and friends, the Cardinal Newman team performed ‘out of their skins’ with unbelievable results achieved all-round.

In a competition involving the best runners from 11 schools, the racing was always going to be highly competitive and so it proved to be, however this team were well prepared. They had trained hard leading up to the competition and all that hard work, both physically and mentally, really paid off as we picked up 6 of the available 9 shields. This success really was a team effort. It was the consistency of the team that led to the overall victories. Our 5 individual medallists would be the first to recognise the massive contribution of their team mates in backing up their own high quality performances. It really was fabulous to see so many red and white runners up in the leading pack of most races. The training paid dividends and every runner should feel immensely proud of this extraordinary achievement.

As always, we would like to say a massive thank you to all the parents who were present on Saturday to share in our success. Without you it really would not be possible…the team effort fully includes you all so thank you once again!

See below for a full outline of the scores…CARDINAL NEWMAN, District Cross Country Champions 2012…6 times over!

A fantastic performance by the whole team!

To win 6 out of the 9 available shields is a phenomenal performance!

Congratulations also to our 5 INDIVIDUAL medallists:

We also had several 4th place finishers…so close to a medal…and something to aim for next year! 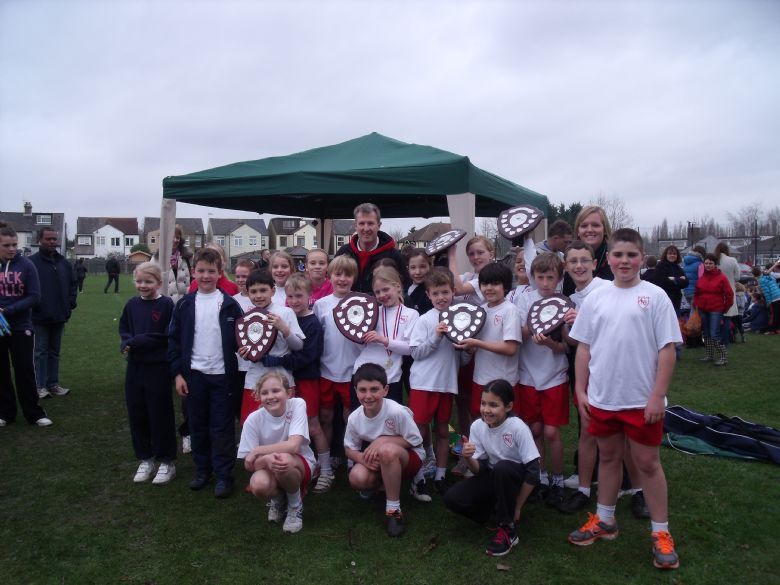