Last Saturday morning (March 20th) the cross country teams took part in the annual ERPSSA District Championships at Claremont Fan Court School. Despite the miserable drizzly weather it turned out to be another fantastic day on the sports field for the school.

This year saw the first ever running of races for Under 9s. The Under 9 girls were out in the first race and faced a very tough task after losing 2 key runners overnight due to illness and injury. Despite this handicap, they ran with a great deal of commitment and there was a particularly inspiring individual performance from Darby Begley-Jones who picked up the bronze medal for 3rd place. Alice Manning also performed superbly to finish 7th, which is an excellent finish for a Year 3 girl. The team results were very close and we eventually finished as runners up to a very powerful team from Notre Dame.

The Under 9 boys found the competition very tough with the standard of runners proving to be very high. Michael Burns ran very well finishing in 6th place and the boys’ team finished in overall 6th place.

With the boys and girls results combined, our Under 9 team finished as runners-up which was an excellent result. Well done to all our team!

Double Glory for Under 10s

With the drizzle persisting and the wind getting a little stronger, the Year 5 girls’ team joined the competition. This race proved to be a great challenge but the girls ran very well as a team. Abbi Nagarajah finished in 10th place followed over the line by Phoebe Cheveley-Grayson in 11th. The other girls packed in well for a very creditable team position of 3rd place.

The Year 5 boys’ team looked strong on paper and expectations were high as they took to the start line. Would they perform on the day? Absolutely! They performed in style as Jack Butler, Ethan Lee and Michael Smith finished in the top ten and James Navarro came home in 13th for an excellent team total of 32 points and first place. This fantastic score also meant that the combined boys and girls totals gave the Under 10s the overall winner’s shield as well. A superb performance by our team – well done!

Under 11 Boys Triumph in Style

The Under 11 girls’ race proved to be the most controversial of the day with the leading pack of runners taking a wrong turning in the latter stages of the race. This proved to be potentially decisive for our team as both Helena and Nicole were in this leading pack and lost ground as a result. Nevertheless, it was a brave and committed team performance with Elena Eustace finishing 16th, Helena Garland 17th (after being 3rd prior to the confusion) and Nicole Fallon 19th. Hannah Bates was our 4th scorer in 29th place.

The final race was the very eagerly awaited Year 6 boys’ races. This is always a ferociously competitive race but we went into the race with high expectations of success. The challenge was set through one simple question – “can you beat the Year 5 boys’ total?” I thought this would prove a tough ask but the boys responded in sparkling style. Callum McLeod joined in a head to head battle at the front with an old adversary from St James and both Jack Rice and Alex Federico pounded along in close pursuit. Jonathan Burns also ran superbly and at the finish line we crossed with Callum taking the gold medal, Jack 4th, Alex 7th and Jonathan 12th. A team total of 24 points. Not only had they beaten our Year 5 boys total but they comfortable defeated all their opponents to claim the Champions Shield. A fantastic display from all the team! 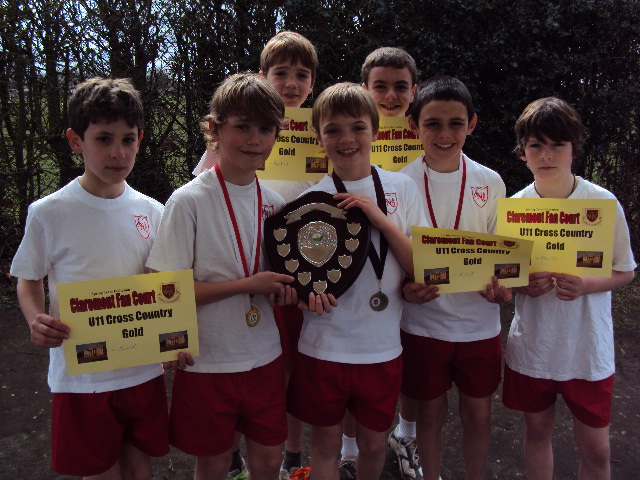